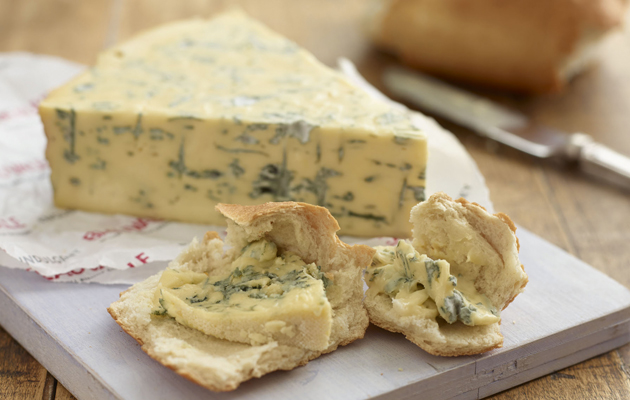 Not everyone likes blue-veined cheese, probably because it has a strong flavour. Personally I love it, although my favourite is a creamy Dolcelatte made in Italy. I’ve noticed that the Italians keep the best of their dairy produce for themselves. So you haven’t tasted the best Italian cheeses unless you’ve been to Italy.

Let’s consider British blue cheeses though, after all, they are what this article is about.

The most well-known blue cheese in Britain is stilton and of course, there is a white stilton cheese too. Stilton cheeses have a Certification Trade Mark and they can only be made in the English counties of Leicestershire, Derbyshire, and Nottinghamshire. It has never been produced in the town of Stilton, which is in Cambridgeshire. The best blue stilton should be crumbly, not hard.

Other famous British blue cheeses are Wensleydale, Shropshire blue, and Cheshire blue. However, there are many more that are produced all over the UK. They can be made from cows milk, ewe’s milk or goats milk. Dovedale is made with cow’s milk, while Harbourne blue is made with goat’s milk. One of the cheeses made from ewe’s milk is the Scottish cheese, Lanark Blue.

One of the Welsh blue cheeses is Perl Las (Blue Pearl in English), which won the gold medal in 2015 at the World Cheese Awards. This is a special blue cheese which is handmade with sea salt rubbed into its rind, rather than it being placed in brine like so many other cheeses. It has a mild taste, so perhaps even those who profess not to like blue cheese would like it. It’s made with cow’s milk.

Dovedale blue is produced only using cow’s milk from the counties of Staffordshire, Nottinghamshire, and Derbyshire. There’s also Dovedale Blue and Black cheese, with the black coming from the inclusion of cracked black peppercorns.

Dorset Blue Vinney used to be made in all Dorset farmhouses before the Second World War. Production began again on Woodbridge Farm, Dorset, in 1980. It’s made to a recipe that is more than 300 years old. The family that owns the farm have been producing Blue Vinney for more than 40 years.

Some blue cheeses have imaginative names, such as Blissful Buffalo, made from ewe and buffalo milk. Then there’s Blue Murder, a cheese from Scotland, made from cow’s milk. That is made by Alex James a former member of the UK band Blur.

There are many other British blue cheeses to sample, although you may have to order them online.