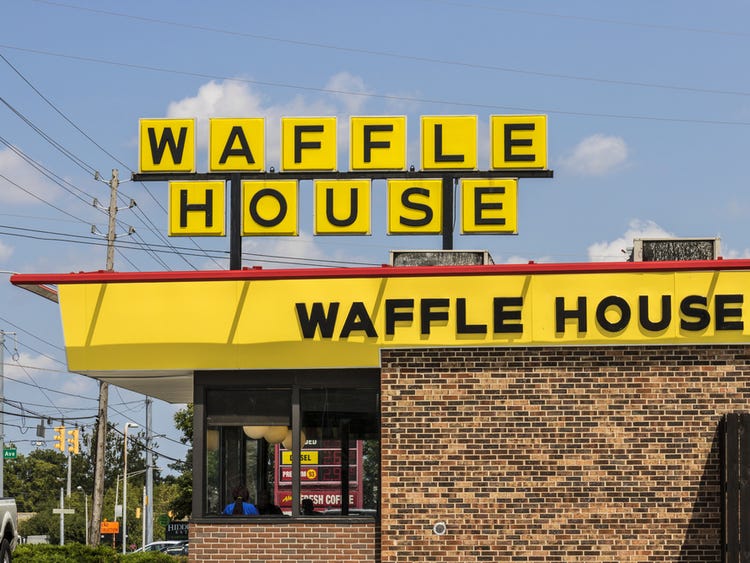 Around the 15th century waffles began to evolve. Basically a batter was laced between two iron grids, some quite elaborate in design, and eaten as a sweet as well as used in religious ceremonies. The batter was often flavored with flower water and honey, cooked and served with extra honey or fruit and enjoyed as a dessert rather than a breakfast food. Similar to the French, the finished product could be kept for several days and traveled well. It was first introduced to Colonists by foodie president Thomas Jefferson in 1789, who returned from France with the first known waffle iron to grace our shores (no invention went unnoticed by foodie Thomas) who proceeded to enjoy and serve waffles at his state dinners as a final course, along with fresh berries and cream.

In North America, Belgian (spelled with an “a”) waffles are a variety with a lighter batter, larger squares, and deeper pockets than the ordinary American waffle. They were originally leavened with yeast, but baking powder is now used. First showcased in 1958 at Expo 58 in Brussels, Belgium by a European, they found their way across the pond and introduced were introduced at a the Century 21 Exposition in Seattle in 1962, served with whipped cream and strawberries. Moving forward, they were further popularized during the 1964 New York World’s Fair at Flushing Meadows Park in Queens. These waffles were introduced by Maurice Vermersch of Brussels, Belgium primarily based on a simplified recipe from Brussels. He wisely decided to change the name to the Bel-Gem Waffle at first, after observing that many Americans could not identify Brussels as the capital of Belgium. (And even worse, many people would associate them with brussels sprouts, America’s most despised food.)

For centuries waffles were primarily eaten in Western and Northern European countries and there are many variations. Here is a quick rundown:

The Liège waffle is a richer, denser, sweeter, and chewier waffle; native to the region of Eastern Belgium and alternately known as gaufres de chasse;

Flemish waffles, or Gaufres à la Flamande, are a specialty of northern France and portions of western Belgium. made with yeast;

American waffles – generally denser and thinner than the Belgian waffle, they are often made from a batter leavened with baking powder and served for breakfast;

Bergische waffles, crisp and less dense, usually heart shaped; also a smaller wedge-shaped version serves as a decoration in an ice cream dessert or alongside a cup of tea;

Waffle cone – every American recognizes these, thin and shaped into the form of a cone while still warm, cooled and filled with ice cream;

Chicken and waffles – popular in Southern and soul food cuisine, but also attributed to Pennsylvania Dutch cooks in the 1800s; they are still served at many regional restaurants and rank right up there with chicken fried steak and other southern favorites; not rocket science here, pieces of fried chicken are placed on top of a waffle and drenched in syrup;

In the first part of the twentieth century, no self-respecting kitchen was without the proverbial waffle iron, often a popular wedding gift, and the breakfast of choice on weekends with bacon or ham. In 1953, busy homemakers put away their heavy waffle irons for good when “Eggo” frozen waffles were introduced, a great time saver and a quick breakfast, simply dropped into the toaster. To this day they remain a big seller along with pancakes and french toast. In 2017 alone, 164.8 million Americans consumed the three, either packaged or homemade. And the popular restaurant chain Waffle House has sold 877,388,027 since opening their doors in 1955. So whether you prefer your version on the run or as an elaborate dish smothered with berries and cream, they are easily available, no iron required. Kind of a perma press breakfast.